This week, we've released our latest major version update of our Broadcastr software for the 2015-16 season. The new update includes some important improvements to the software: 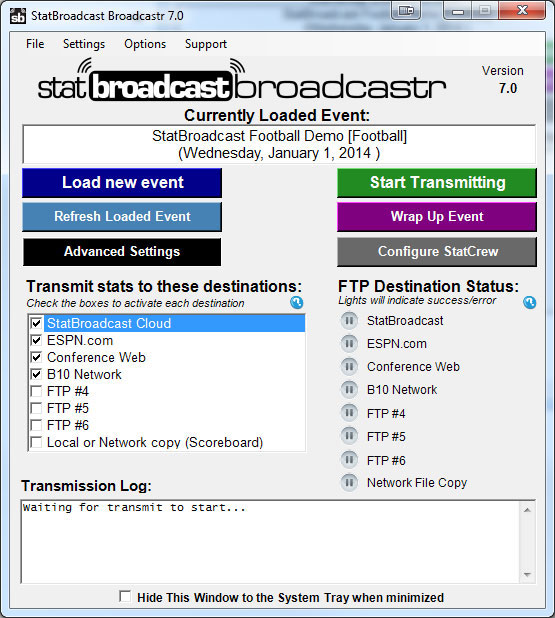 - Fixed locking during Start/Stop
A major upgrade made was the elimination of the program locking up during the initial start and stop phases of transmitting. Changes to the application now allow it to remain responsive and not lock up the user's operating system while these tasks are in progress. The app also now gives the user feedback during 'Stop transmission'; the screen displays that the app is trying to stop in-progress transmissions and reports back on their status.

- Interface improvements
The main screen of the application has been reconfigured. As well, the separate Start and Stop Transmitting buttons have been combined; the start button will now turn into stop when the transmission is running and vice versa once stopped.

The Advanced options panel has also been redesigned. The information for all six additional FTP destinations can be edited from one single datagrid, rather than the previous design of switching between separate tabs. Also, transmission and application settings have been separated into different tabs and additional options were added.

The app also prompts users when it first opens to load a new event. This will help with users who forget from time to time to load a new event and start their transmission using the configuration from the last event they ran in StatBroadcast.

The app also provides additional feedback to the user when it is attempting to connect to the StatBroadcast cloud, rather than just attempting that in the background and remaning unresponsive until the connection was established. This will help users in determining when/if a connection is made and whether there is a problem or not.

Certain settings can also be updated remotely as needed by StatBroadcast, enabling us to push settings updates without needing users to install a new upgrade and reducing the number of overall udpates we may need to issue throughout the school year.

The new version of Broadcastr (7.0) can be downloaded from the Software page within the Admin Control Panel.